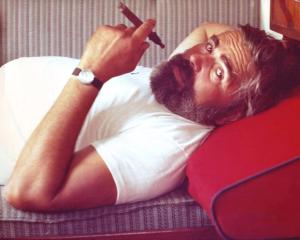 I am blessed to be married for nearly 40 years to an extraordinary father. My girls are lucky to have him. Happy Father’s Day, Russ.

There is another person I want to remember today – my dad – gone a full year.

The thing I remember best about him was his voice. It was soft and deep.   He had perfect pitch. When he celebrated communion, he often sang and when he did, it was like a single voice from heaven. He used his sotto voce to add emphasis to his sermons too.  I think it was partly because of his early training as a “thespian.” Seems like that gene runs in the family.

Most of his sermons centered on things that had happened around our house.   That’s probably why sitting in the front pew on Sunday mornings was a little unnerving.  I never knew if I was going to be the subject that day.

I remember a few sermons that focused on my pitiful attempts to learn to ride a bike, but my favorite sermon centered, thankfully, not on me but on my brother Gordon.  Dad and Gordon had been out collecting bugs one afternoon and they were poking holes in the top of the bug jar when Gordon in all his 3-year-old wisdom announced “if God were a bug, I wouldn’t keep him in a jar.”  The perfect starting point for a memorable sermon and I’ve tried not to put God in a jar ever since!

My father also used his voice to advocate for those who had no voice – migrant workers in Tulare, the little boy in my 5th grade class who was being abused by a bully of a teacher because he had epilepsy, and of course, those who were denied their civil rights.  He never backed down, not even when it cost him his job.  He did it as young journalist, as a priest and as a professor too.

I think this was the inspiration for our famous dinner table discussions.  He made us think about what we believed and advocate for those causes that meant the most to us. How many fathers do you know who encouraged their 17 year old daughter to get on a bus and travel to Washington D C to protest the war in Vietnam?

My father also used his voice to share his love of literature:

I hated Shakespeare until he read it to me.  I didn’t get poetry either, until we started with Robert Frost and worked our way up to Emily Dickinson. He made us listen to Opera and symphonies, directing each piece with one hand as we drove ‘cross-country.

And then there was Ernest Hemingway.

My kids called my Dad  “Papa” instead of grandpa because he looked just like him. When he read The Old Man and the Sea aloud, you could smell the ocean and feel the dried salt water on your skin.

The last few months of his life, my Dad couldn’t speak, so when I went to visit and we were alone, I would read to him.  I chose The Old Man and the Sea. It was my turn to share what he had taught me to love.

These are some of the memories I have of my dad’s voice.

When Emily was very small, Russ’ grandmother died.  She was trying to understand where Great Grandma had gone.  I told her that Great Grandma’s spirit had gone to heaven.   Of course, Emily wanted to know what a spirit was.  As I struggled to explain it to her, she looked up at me and wisely asked, “Is a spirit like a voice?”

I stopped.  Sometimes it takes a 3 year old to explain things.

I learned a new word in yoga this morning:  kula.  It means community.  I think this is one of those times when the universe is trying to tell me something.

Yesterday I watched Maya Angelou’s memorial service.  Over and over again speakers talked about being part of her “family.”  Not blood family, but the people Dr. Angelou gathered around her – her community – her kula.

So what does this have to do with Aspen groves?  Well, as anyone who has had a conversation with me about my favorite trees knows – Aspen groves are actually one organism.  They can spread over acres, but they are all part of a whole.  All of my kulas are part of the fabric that makes up my life – my personal Aspen grove.

I am blessed in different ways by the communities that support me and I am grateful for each of them – and so today as I left my yoga class, I set my intention – gratitude for each of the trees that makes up each kula that constitutes the Aspen Grove of my life.